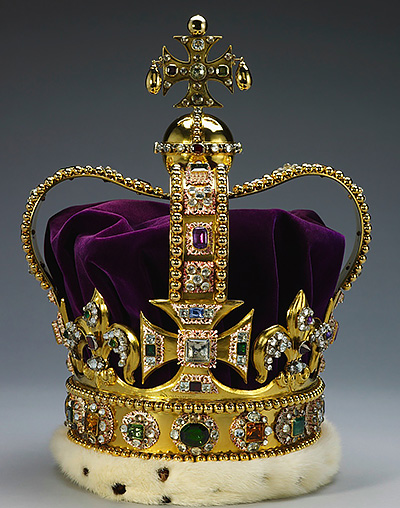 The Crown provides the strongest symbol of continuity in our constitutional monarchy. When one monarch dies the Heir-Apparent immediately assumes the role of Sovereign and in due course is anointed and then crowned with St Edward's Crown (to the left). See Symbols for more information.

Unlike republics where heads of state either come and go as a result of appointment or election or remain to become permanent dictators we have a system where our permanent Sovereign devotes his life for the people but leaves day to day governance to politicians. When one Sovereign dies the heir apparent immediately becomes sovereign and from that moment is said to have begun his reign. Coronations come later. We in Australia know who will take the place of the Queen and in particular we know the names of the next three in line to the throne. With this system of a-political, trained and experienced individuals whose role it is to represent every citizen equally, to ensure the reserve powers are in place in case of emergency and who rule through the will of the parliament and by extension the will of the people, we are blessed with the safety of continuous representation. Our Governors-General are always Australian citizens as are all State Governors and whilst in office they perform all the functions a distant monarch would perform were he present. Governors-General come and go but whilst they are in office they are accorded head of state precedence nationally and internationally. Our Sovereign reigns for life and so ensures that the checks and balances and the rarely used prerogatives remain continuously in place for our protection.