The Crown by F Hugh Eveleigh 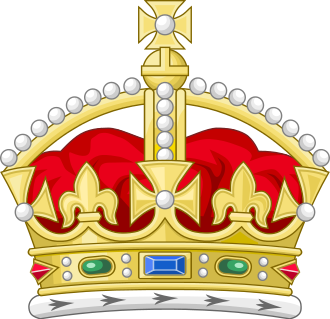 Additional to the general meaning of Crown as being an elaborate head-covering, it also has a far more significant constitutional meaning, referring to the collectivity of the institutions of government i.e. the authority of the State or of the Executive and how the Crown acts in its legal capacity. (This is in contrast to the term Sovereign which refers to the King as both a person and his actions or decisions as the holder of our nation's ultimate authority.) The crown is a corporate body, an institution. Referring to 'the crown' as a corporate body means the sovereign is regarded as part of this body corporate which also includes the executive, parliament and judicial governance. The crown's legal capacity is shown when we refer to the powers invested in the Crown (as opposed to 'the state' or the 'executive'). In Australia, when we refer to `The Crown' we are referring to the Australian Executive, of which the Sovereign is head, acting in a legal capacity.

As the Sovereign is only part of the corporate crown and as he will one day die, the crown's authority continues until the next sovereign takes over. As the time lag between one sovereign and another is but a microsecond the matter is theoretical but it does show that the crown exists separately from a specific monarch. The Governor-General, at the death of the Sovereign, would continue uninterruptedly to carry out his duties but would in due course meet the new Sovereign and offer his continuing allegiance to Him and thus the Australian people.

The King's two capacities, private and official are brought together in his style of address. He is always referred to as His Majesty regardless of which capacity he is in at the moment of reference.

Although the King is the only person who can legitimately wear the physical crown, there is an additional different and more important meaning for the word 'crown'. It represents the ultimate authority of the Australian State and its workings and ensures that it continues uninterruptedly regardless of which monarch reigns. When the King dies the crown's authority continues until the next monarch takes over its authority. In real life this happens immediately but were there to be a problem in transition from one monarch to another for those minutes the crown would be unaffected.

All Australian criminal courts of justice refer to the prosecuting counsel as 'R' which stands for the Latin rex or regina meaning king or queen. In criminal and some civil cases the State, be it an individual State or the Federal Commonwealth, is referred to as the crown or more usually 'R' because the defendant has to argue his case against the authority of the crown regardless of where he may live. It hearkens back to historical times where on occasion the king would hear a case made by a defendant and decide its outcome himself. These days, of course, there are lawyers and juries and others who try to ensure that justice is done as fairly as possible in the name of the crown.

The appeal of Constitutional Monarchy is as much to the heart as to the head. It appeals to deep-seated and unanalysable emotions, lying far below the realm of consciousness. There is no perfect system of governance except in theory but constitutional monarchy is as close to the ideal as has so far been devised. The monarchy adapts and moves forward as it has done for well over a thousand years.

In a constitutional monarchy the Sovereign must and always will act in accordance with the law. A date for the change from direct absolute rule of a king to the constitutional rule (i.e. with reference to the wishes of the people) is generally assumed to have happened when King John was forced to leave his mark on Magna Carta in 1215. A 1297 copy of this remarkable document, one of only two held outside the UK (the other is in the USA), is held on display in Parliament House in Canberra. Its importance in the gradual development of absolute to cooperative rule with the people, resonates even today.

Another essential of constitutional monarchy is that the Sovereign never votes, is not a citizen of any country and thus holds no passport and is always politically impartial. This is achieved through the convention that the Sovereign (in our case more commonly the Governor-General) acts only on the advice of Ministers i.e. the government voted in by the people. As a result it is the Ministers who are held to account for their actions. The Governor-General (with the King) acts as the human symbol of an otherwise impersonal state. His/her powers are essentially residual: they are powers necessary for the formation and ending of governments. By convention and practice, the Governor-General has, what Bagehot wrote in The English Constitution and which still applies today in all the King's Realms: "The King/[Governor-General]* has three rights - the right to be consulted, the right to encourage and the right to warn." For this reason the conversations between a Prime Minister and the King or Governor-General will remain private. This is a fundamental protocol of our government. * Added by us and not in the original quote

Perhaps the greatest benefit of our system is that the King, having no public political history, is free from party ties and can thus represent all the citizens of the country. The same might not be said of a Governor-General which is why the Prime Minister who puts forward a name for submission to the King for her approval as the next Governor-General has to act very carefully indeed. Such has not always been the case at Federal and State level and the result has rebounded on the Prime Minister or Premier to their discredit. We do not know if the Sovereign questions a submitted name but if a Premier or a Prime Minister is determined to submit a name without having taken soundings from all parties and arms of government then the onus falls directly on him if matters do not work out - not the Sovereign. The Australian Monarchist League believes that the Leader of HM Opposition be asked to be part of the submission process.

In any case the Sovereign is always present and thus our security and freedom is guaranteed because whatever might transpire between a Prime Minister and a Governor-General is an Australian matter. The Governor-General is executive head of state and one of his paramount duties is to uphold the Constitution and the Law regardless of political shenanigans but if ever a problem arises (for instance the 1975 constitutional and political crisis relating to financial supply), it was the King who remained as Sovereign of the nation and the ultimate guardian of the Constitution. He may not take any active role in Australian governance but his presence or the presence of his successors is constant and no politicking can change this fact. Only he can appoint or dismiss a Governor or Governor-General (albeit on the Prime Minister's suggestion) and thus he acts as a final buffer to any type of abuse of power within Australia. There is much to be said in favour of his geographical distance from any political events in our country. This fact enables the constant anchor of his existence to be solidly placed far from potential local problems. His existence is the ultimate guarantee of good practice in our governance.