Design of the Australian Flag

DESIGN OF THE AUSTRALIAN FLAG 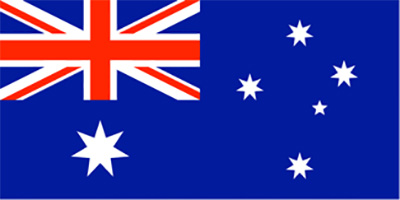 WHO DESIGNED THE AUSTRALIAN FLAG?

Although some 32 823 entries were received in the national competition to design the flag, five ‘winners’ were deemed to have designed more or less identical entries and were thus credited with having designed it. One winner was a fourteen year old boy from Victoria. The prize money of £200 was split between them. A unique flag of large size (36x18 feet or nowadays c.11x5.5 metres) was produced for public comment.

The Australian flag is composed of three parts:

The union of crosses which is today known as either the Union Jack or the Union flag is represented to show the historic fact of settlement by the British at the time of the first fleet. Apart from the UK and Australia three other independent countries represent their historic roots in a similar manner: New Zealand, Fiji and Tuvalu.

The Australian Star of Federation is a seven pointed star representing the six States and one more point for Australia's territories. There are two mainland territories, and several overseas, including two in Antarctica. The Southern Cross is a constellation that can be seen from all of Australia's states and territories


TECHNICAL DETAILS OF THE AUSTRALIAN FLAG

The positions of the stars are as follows:

The positions of alpha-epsilon are given with respect to the centre of the square fly, and distances in terms of hoist width of the flag.