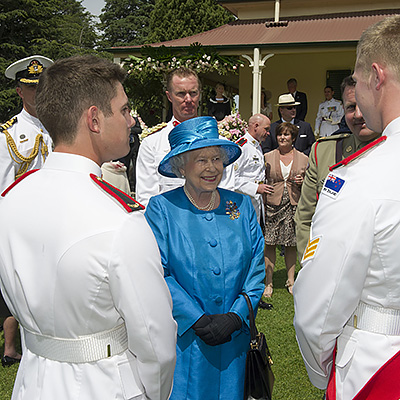 The Queen is Commander in Chief of the naval and military forces but this role is usually vested in the Governor-General as her representative. In practice the Governor-General acts on the advice of government Ministers but there is an important ceremonial aspect which the Governor-General alone performs and which enhances the loyalty of the forces to the Crown and thus to the people. When the Sovereign is present she may ‘present new Colours’ herself to a particular regiment and in this photograph we see her chatting to cadets at the Royal Military College, Duntroon after having presented such Colours. [‘Colours’ are uniquely embroidered and brocaded flags which represent the Regiment’s honour, loyalty to the Crown and to duty. Originally they would have flown in battle. When new Colours are presented the old one is usually displayed in the Regimental HQ.]

One very particular and unquestionable fact about Australia’s governance since the late eighteenth century is its stability.The processes of law and governance have remained solid at all times. Even though we have experienced huge upheavals since our founding, the rule of law and sovereignty in the Crown have remained inviolate.

This is, considering the state of most other nations, remarkable. It should come as no surprise to know that the majority of stable nations in the world are constitutional monarchies simply because the system of authority and responsibility which they encompass, allows the people to have their say in all things but to do so knowing that the structure of authority will ensure that all change can be effected within the rule of law.Our Crown is intimately linked with the great Charters of Liberty of the past and has developed over its 1000 year history to become respected and admired and copied all over the civilised world.We are blessed with governance which cannot be bettered and our Constitution, integrated entirely with the Crown, is our written safeguard.

Together, the Crown and Constitution protects each of us.