Republicans Attack Queen for Being Protestant

Whilst the Australian Monarchist League has been active in promoting The Queen’s Covid and Easter messages, and also our online celebration for Her Majesty’s 94th birthday tomorrow, Tuesday 21 April, the Republican Movement have also been busy, mainly criticising the Queen, the monarchy and the constitution but without ever telling us how the republic they propose will better the system of governance we currently enjoy. We shouldn’t forget that politicians will come and go, recently more frequently than before, but the Crown remains as a permanent protector of our Constitution and democracy. 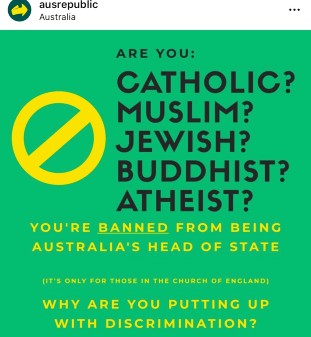 One such example is their new advertisement (pictured alongside) which, like most republican promotions, is both inflammatory and fundamentally wrong. It states “Are you: Catholic?, Muslim?, Jewish?, Buddhist?, Atheist? Your banned from being Australia’s head of state (it’s only for those of the Church of England) why are you putting up with discrimination?”

The fact is that, upon appointment, the Governor-General becomes executive head of state and any Australian can aspire to that role whatever their race or religion. We have had so far, Jewish, Catholic and atheist Governors-General/heads of state and the likelihood is that we will have persons of other faiths in that office in the future.

Whilst it is true that the monarch must be of the Church of England, because that is the state religion of England; in Australia, we have freedom of religion which is guaranteed by the constitution and by the Queen. Many Catholics, Muslims, Jews, Buddhists, Atheists and others value the freedom of worship they enjoy under the Crown, whether in the United Kingdom or in Australia or in other realms.